It’s been a few days since I’ve posted anything but we’ve had some days where there wasn’t much happening.  We visited Gloucester and Boston, then Bar Harbour Maine which didn’t seem to have lots to offer but a main street filled with souvenir shops.    Then we went to Halifax, Nova Scotia where we had a great tour guide who gave us lots of information and took us to Peggy’s Cove which was a picturesque fishing village built on granite and so we were told had the most photographed lighthouse in Canada - just looked like any other lighthouse.  Took our photos and then the rain set in as we headed back to Halifax and then continued for the next few days. 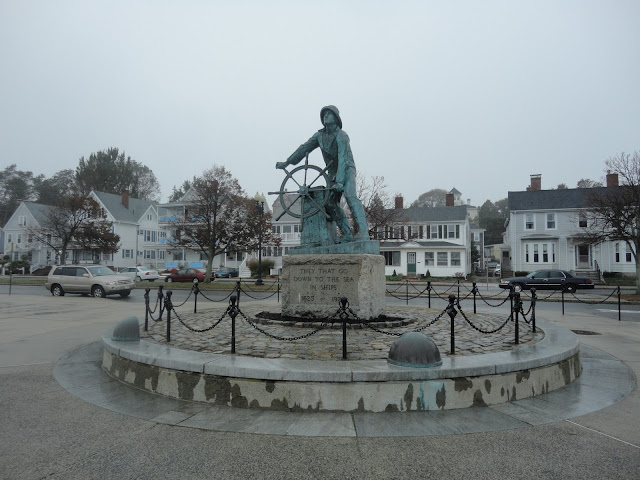 Memorial statue to over 5000 fishermen and their boats which have been lost at sea.
The last couple of days have been interesting in that the weather turned very nasty and our wise captain decided to get us out of the path of an approaching low weather system rather than put 2000 passengers at risk.  We spent the day onboard while the stabilisers coped with the ugly seas whipped up by winds of more than 85mph as we skirted the storm.
More bouncing through the night and this morning we were in Charlotteville on Prince Edward Island, home of Anne of Green Gables.  We visited the pretty home which was used as the model of the house in which the characters in Montgomery’s books lived, and had been owned by relatives of her Grandfather before being turned into the Green Gables historical site.  Unfortunately it was pouring with icy rain and the temp was around 3 degrees and bitingly cold was so we decided to re-board the ship rather than explore the town of Charlotteville.
Posted by Catberglar at 5:54 AM