I’ve only put a couple of photos together for this update because the internet is just so slow or non-existent where we’ve been in the last couple of days.
We’ve hardly had time to think since leaving Pretoria and our days have been full, but the highlight would have to be our half day spent in Kruger National Park.  We were picked up at 5.00am so that we could beat the busloads of tourists. and our guide was smart and made no promises that we would see any animals. 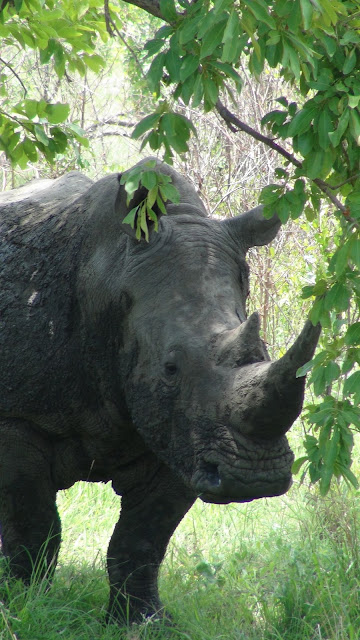 Once we were in the park we saw giraffes and zebras and elephants feeding on the sweet grasses and new leaves on the trees since they had their first summer rains within the first couple of kilometres - things were looking good. How could you not get excited?  We came across a lioness laying in the middle of the road surrounded by vehicles, and she had no intention of moving.  Not ten feet away from her was a prospective lover who was trying to stake his claim and not let her out of his sight until he had had his way with her.
Kruger Park is huge and there are roads leading everywhere and our driver’s partner called on the radio that he had found a leopard, which is apparently very rare so we hightailed it to where they were watching her.  She was straddling a branch in a tree about 20 feet above the ground.  We stayed and watched her for ages and while she was aware of us she was quite happy to just enjoy her siesta.
We saw elephants having mud baths, heaps of antelope, hippopotamus and another rare sighting - a black rhino who was hiding behind some shrubs.  The sightings just kept on coming and by the end of our time when we sighted a giraffe, we got to the stage where  we thought ‘ho hum, not another giraffe’.

Posted by Catberglar at 2:46 PM